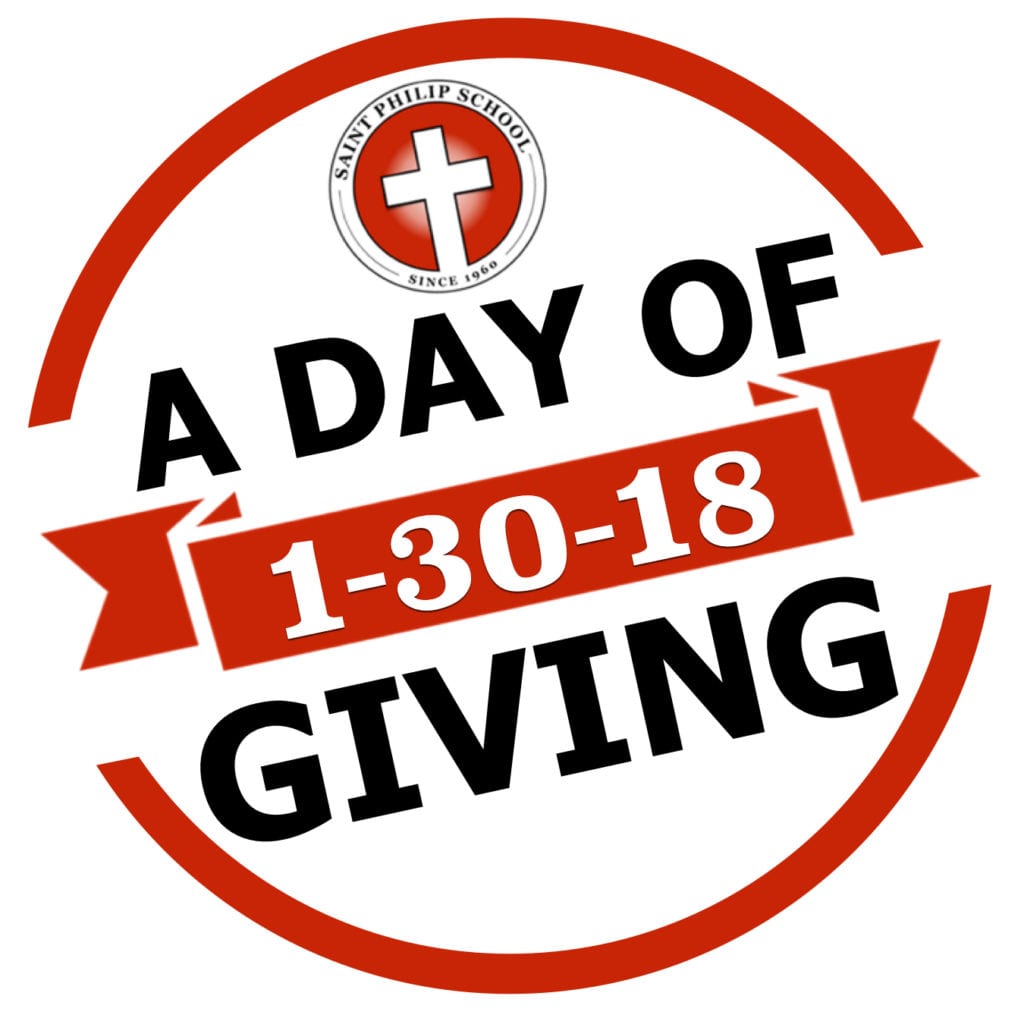 Saint Philip School is pleased to announce that we will be participating in the national online giving campaign:

“Many Gifts, One Nation: A Day of Giving to Catholic Schools”.

Countless people in our country have been blessed by the many gifts of Catholic schools, and have carried with them what they have learned and witnessed.  Because ensuring financial vitality in Catholic schools is essential to their future growth and sustainability, this day of giving offers the opportunity to ask alumni, parish and school families, and friends of Saint Philip to give back to our school, which continues to bless them with these gifts.

Saint Philip School’s Day of Giving will begin on Tuesday, January 30th at 9:00 a.m. EST.  To support our mission with your donation, please visit our website, www.stphilipschool.com on 1/30/18.  We truly appreciate your generosity and support as we seek to provide a 21st century learning environment with the latest technology, best resources, and most qualified educators. 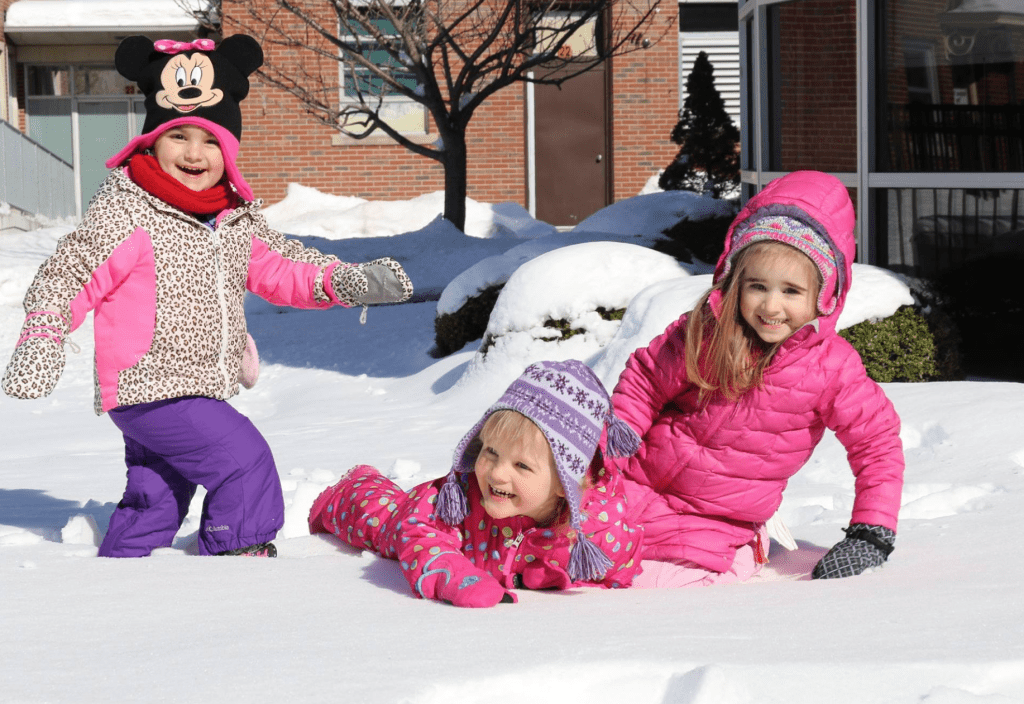 Join us at our Open House on Sunday, January 28, 2018 with Mass starting at 11:30 a.m. and our Open House from 12:30 p.m. to 2:30 p.m. at Saint Philip School located in Greenville, Rhode Island. Tour our campus, meet with our faculty, and experience the difference in a private, Catholic education! Come see how we teach the WHOLE child!

Come visit us at our Early Learner Meet and Greet for children entering our Little Cardinals program (three-year-olds) to Pre-Kindergarten. Meet our teachers and visit an Early Learner classroom! Come see what we are all about! 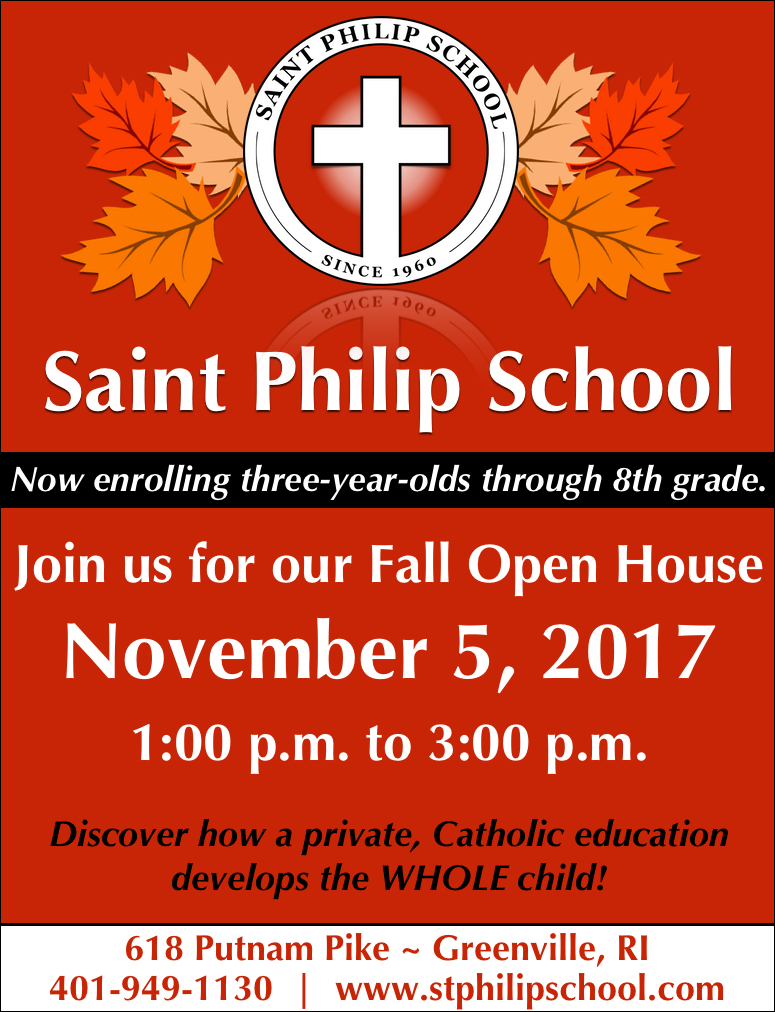 We will be hosting our Fall Open House on Sunday, November 5, 2017 from 1:00 p.m. to 3:00 p.m.. Come see our beautiful campus, meet our dedicated faculty, and learn more about our faith filled, educational community! Email office@stphilipschool.com or call 401-949-1130 today for more information.

NEW FOR 2017!
School supplies can be purchased through ClassBundl Supplies this year. Get all of your back to school supply shopping done and delivered right to your doorstep, all while raising money for Saint Philip School!  Please consider utilizing this service for ordering your classroom supplies!

GET YOUR SUPPLY SHOPPING DONE NOW

We are thrilled to announce a new collaboration between Saint Philip School and Bishop Feehan High School!   The Partner School Early Action (PSEA) Program is unique in scope and may be of benefit to many of our school families.  Through the PSEA Program, Saint Philip School students in Grades 5, 6, or 7 may apply early and reserve a conditional spot in the freshman class at Bishop Feehan, one to three years before they would normally apply.  They are then able to remain at Saint Philip through their 8th grade year while taking advantage of the many leadership opportunities we offer, continuing their solid spiritual formation, and strengthening their academic and study skills.  For more details about the Partner School Early Action Program, please click below. 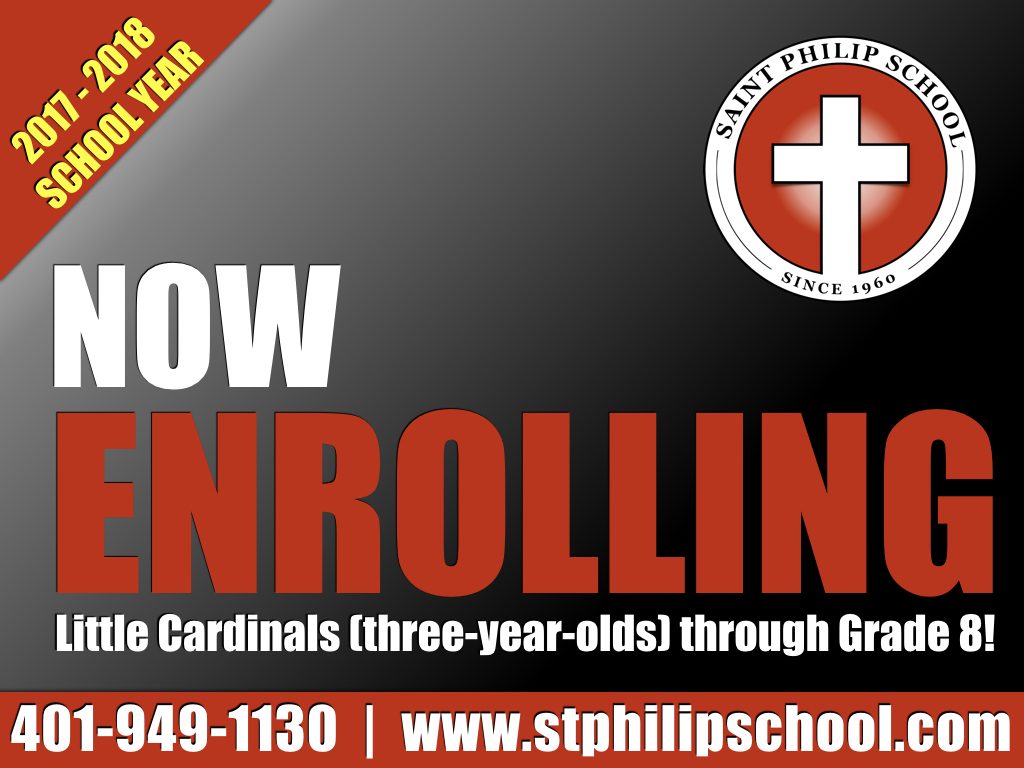 Open enrollment for the 2017-2018 school year has begun! We currently have limited spaces available for Little Cardinals (three-year-olds) through 8th grade. Fill out a Prospective Student Inquiry Form and sign up for a Snapshot Tour today!

Here is a new post from pediatric occupational therapist Angela Hanscom, author of a number of popular posts on this blog, including “Why so many kids can’t sit still in school today,” as well as “The right — and surprisingly wrong — ways to get kids to sit still in class” and “How schools ruined recess.” Hanscom is the founder of TimberNook, a nature-based development program designed to foster creativity and independent play outdoors in New England.

I still recall the days of preschool for my oldest daughter. I remember wanting to desperately enrich her life in any way possible – to give her an edge before she even got to formal schooling. I put her in a preschool that was academic in nature – the focus on pre-reading, writing, and math skills. At home, I bought her special puzzles, set up organized play dates with children her age, read to her every night, signed her up for music lessons, put her in dance, and drove her to local museums. My friends and I even did “enrichment classes” with our kids to practice sorting, coloring, counting, numbers, letters, and yes….even to practice sitting! We thought this would help prepare them for kindergarten.

[Why so many kids can’t sit still in school today]

Like many other American parents, I had an obsession: academic success for my child. Only, I was going about it completely wrong. Yes, my daughter would later go on to test above average with her academic skills, but she was missing important life skills. Skills that should have been in place and nurtured during the preschool years. My wake-up call was when the preschool teacher came up to me and said, “Your daughter is doing well academically. In fact, I’d say she exceeds expectations in these areas. But she is having trouble with basic social skills like sharing and taking turns.” Not only that, but my daughter was also having trouble controlling her emotions, developed anxiety and sensory issues, and had trouble simply playing by herself!

Little did I know at the time, but my daughter was far from being the only one struggling with social and sensory issues at such a young age. This was becoming a growing epidemic. A few years ago, I interviewed a highly respected director of a progressive preschool. She had been teaching preschoolers for about 40 years and had seen major changes in the social and physical development of children in the past few generations.

“Kids are just different,” she started to say. When I asked her to clarify, she said, “They are more easily frustrated – often crying at the drop of a hat.” She had also observed that children were frequently falling out of their seats “at least three times a day,” less attentive, and running into each other and even the walls. “It is so strange. You never saw these issues in the past.”

She went on to complain that even though her school was considered highly progressive, they were still feeling the pressure to limit free play more than she would like in order to meet the growing demands for academic readiness that was expected before children entered kindergarten.

Research continues to point out that young children learn best through meaningful play experiences, yet many preschools are transitioning from play-based learning to becoming more academic in nature. A preschool teacher recently wrote to me: “I have preschoolers and even I feel pressure to push them at this young age. On top of that, teachers have so much pressure to document and justify what they do and why they do it, the relaxed playful environment is compromised. We continue to do the best we can for the kid’s sake, while trying to fit into the ever-growing restraints we must work within.”

As parents and teachers strive to provide increasingly organized learning experiences for children (as I had once done), the opportunities for free play – especially outdoors is becoming less of a priority. Ironically, it is through active free play outdoors where children start to build many of the foundational life skills they need in order to be successful for years to come.

In fact, it is before the age of 7 years — ages traditionally known as “pre-academic” — when children desperately need to have a multitude of whole-body sensory experiences on a daily basis in order to develop strong bodies and minds. This is best done outside where the senses are fully ignited and young bodies are challenged by the uneven and unpredictable, ever-changing terrain.

Preschool years are not only optimal for children to learn through play, but also a critical developmental period. If children are not given enough natural movement and play experiences, they start their academic careers with a disadvantage. They are more likely to be clumsy, have difficulty paying attention, trouble controlling their emotions, utilize poor problem-solving methods, and demonstrate difficulties with social interactions. We are consistently seeing sensory, motor, and cognitive issues pop up more and more  in later childhood, partly because of inadequate opportunities to move and play at an early age.

What is our natural instinct as adults when issues arise? To try and fix the problem that could have been prevented in the first place. When children reach elementary school, we practice special breathing techniques, coping skills, run social skill groups, and utilize special exercises in an attempt to “teach” children how to be still and to improve focus.

However, these skills shouldn’t have to be taught, but something that was developed at a young age in the most natural sense — through meaningful play experiences.

If children were given ample opportunities to play outdoors every day with peers, there would be no need for specialized exercises or meditation techniques for the youngest of our society. They would simply develop these skills through play. That’s it. Something that doesn’t need to cost a lot of money or require much thought. Children just need the time, the space, and the permission to be kids.

Article from the Washington Post. Link to original story:
https://www.washingtonpost.com/news/answer-sheet/wp/2015/09/01/the-decline-of-play-in-preschoolers-and-the-rise-in-sensory-issues/?utm_term=.10401872f0a5 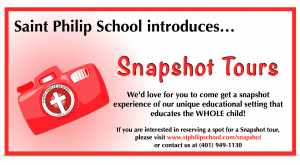 Are you a prospective family, a grandparent of a current student, or a business partner in our community, just to name a few connections that you may have? We’d love for you to come get a snapshot experience of our unique educational setting that educates the WHOLE child! Our tours are designed to provide guests with an introduction to our program that is structured around the complete spiritual, emotional, physical, and intellectual formation of every student.

If you are interested in reserving a spot for a Snapshot tour, please go to: www.stphilipschool.com/snapshot
or contact us at (401) 949-1130. 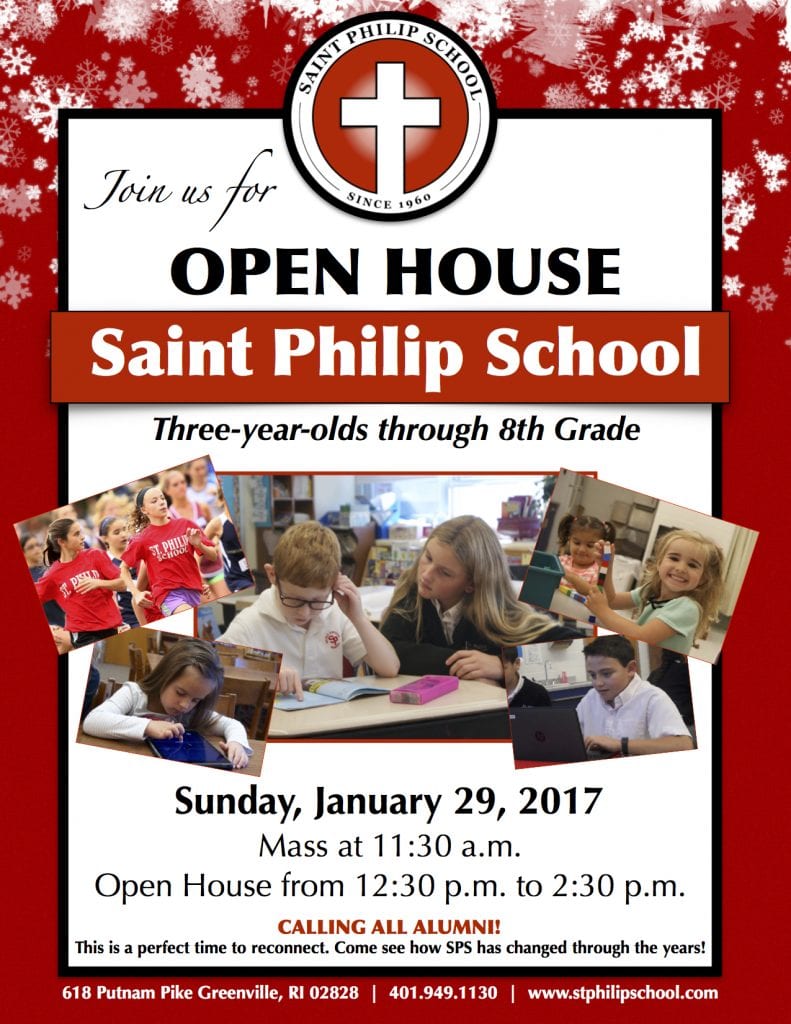 In Memory of Lorraine Iafrate